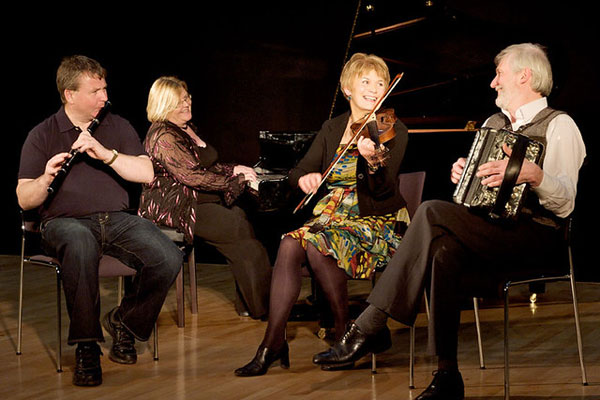 Accordionist Charlie Harris a fine exponent of the South Galway style of music, influenced by the playing of Joe Cooley. Charlie is a member of the legendary Tulla Céilí Band.

He will be performing with fiddler, Maeve Donnelly, who is one of the top Irish traditional fiddle players is known for her unique style. To bring this pair to full intensity, they will be accompanied by pianist and tin-whistle player Geraldine Cotter.

All recognised as fine exponents of traditional music and individually they are known nationally and internationally for their unique approach and interpretation of Irish tunes. 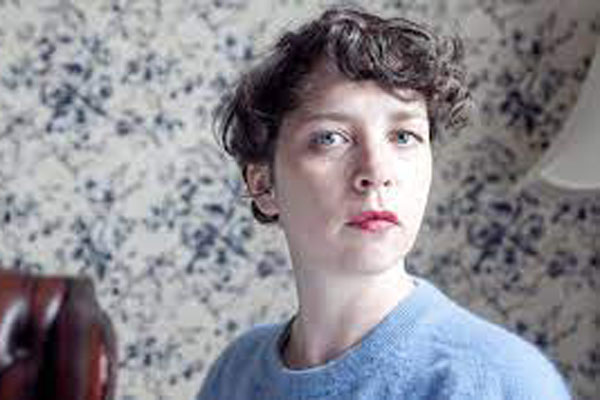 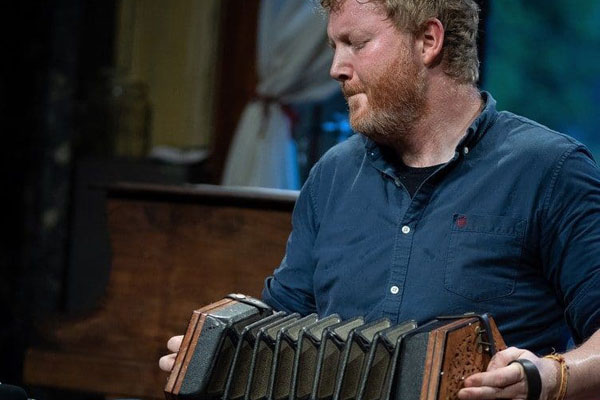 Cormac Begley is a bass, baritone, treble and piccolo concertina player who hails from the infamous Begley family on the Dingle Peninsula. His recent solo album ‘B’ explores the sounds of the Bass and Baritone concertina range. Begley captivates his audience with heart stopping performances. Recently he has brought immense joy to his listeners as he has travelled around the country in his campervan ‘Beauty’ for an outdoor concert series.

Cormac will be joined on the night by the Irish singer and song writer, Lisa O’Neill. The Cavan native started writing songs and music from an early age where she delved into the Irish traditional and folk scene while studying in Dublin. Her unique and distinctive voice has catapulted her into the preforming world nationally and internationally. 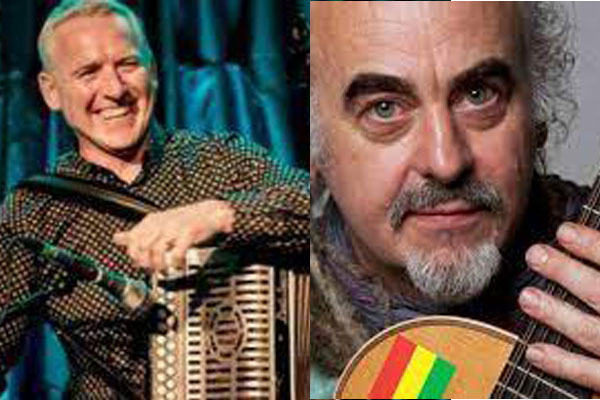 Dónal Murphy from Abbeyfeale in County Limerick is one of Ireland’s most highly regarded accordion players. Dónal is a founding member of the band ‘Four Men and a Dog’ and most recently ‘Breaking Trad’. Murphy has recently launched his album ‘Tailored’. Dónal will joined by his daughter, Melanie on fiddle and son, Eoin on guitar.

The Murphy family will be accompanied by Australian born guitarist, bassist, producer and didgeridoo player; Steve Cooney, who is one of the most dynamic modern performers in traditional music. He has composed his own material and is one of the most sought-after musicians, producer/arranger in traditional music. In 2021, Steve received the TG4 Gradam Ceoil award for composer of the year.

Back to events
We use cookies on our website to give you the most relevant experience by remembering your preferences and repeat visits. By clicking “Accept All”, you consent to the use of ALL the cookies. However, you may visit "Cookie Settings" to provide a controlled consent.
Cookie SettingsAccept All
Manage consent

This website uses cookies to improve your experience while you navigate through the website. Out of these, the cookies that are categorized as necessary are stored on your browser as they are essential for the working of basic functionalities of the website. We also use third-party cookies that help us analyze and understand how you use this website. These cookies will be stored in your browser only with your consent. You also have the option to opt-out of these cookies. But opting out of some of these cookies may affect your browsing experience.
Necessary Always Enabled
Necessary cookies are absolutely essential for the website to function properly. These cookies ensure basic functionalities and security features of the website, anonymously.
Functional
Functional cookies help to perform certain functionalities like sharing the content of the website on social media platforms, collect feedbacks, and other third-party features.
Performance
Performance cookies are used to understand and analyze the key performance indexes of the website which helps in delivering a better user experience for the visitors.
Analytics
Analytical cookies are used to understand how visitors interact with the website. These cookies help provide information on metrics the number of visitors, bounce rate, traffic source, etc.
Advertisement
Advertisement cookies are used to provide visitors with relevant ads and marketing campaigns. These cookies track visitors across websites and collect information to provide customized ads.
Others
Other uncategorized cookies are those that are being analyzed and have not been classified into a category as yet.
SAVE & ACCEPT